This content is current only at the time of printing. This document was printed on 29 January 2020. A current copy is located at https://apvma.gov.au/node/26561 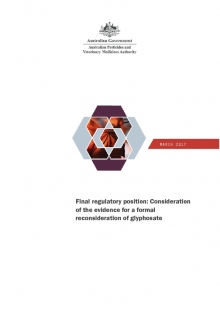 The APVMA chose to consider glyphosate for reconsideration following the publication of the IARC Monograph 112 in July 2015. Once a chemical has been nominated for reconsideration, the APVMA examines the new information to determine whether there are sufficient scientific grounds to warrant placing the chemical under formal reconsideration. This regulatory position report represents the outcome of that scientific nomination assessment process.

Concerns have previously been raised about human exposure to glyphosate, following an assessment by the International Agency for Research on Cancer (IARC) that re classified glyphosate as ‘probably carcinogenic to humans’.

Glyphosate is a broad-spectrum, non-selective, post-emergent, systemic herbicide that kills or suppresses all plant types (except those genetically modified to be resistant to glyphosate) and is commonly used to control annual and perennial broadleaf and grassy weeds in various agricultural and non-agricultural settings. Glyphosate acts by disrupting the shikimic acid pathway, which is unique to plants, to prevent protein biosynthesis and kill the plant.